Financial literacy program focuses on the ability to manage personal finance matters in an efficient manner. It is a key life skill required for an individual’s personal and professional growth. It is important because it enables us to provide for ourselves and avoids situations of debt. Where E -transactions are becoming a way of life, Financial Inclusion is necessary and only possible when people are financially literate.

NIIT Foundation recognizes the need of financial inclusion and has partnered with renowned corporate houses to provide for a sustained Financial Literacy Training Program in semi urban and rural parts of India. The pilot study revealed that most people were either semi financially literate or not financially aware at all.

The Financial Literacy Centres enable participants to learn the “basics” of financial management that allows them to use technology in ways that are relevant to their daily lives. The participants who go through this training learn the basics of banking and savings, mobile accounts and e- wallets, wise borrowing, investments, risk management with insurance and financial planning.

NIIT Foundation has been working indefatigably towards making inclusive and equitable society a reality since 2004. In its endeavour to achieve this overarching goal, the organization has made a number of critical interventions. One of the most significant and conspicuous of these has been its ability to bridge the divide existing between the quality of education being imparted to those at the bottom of the pyramid and to those belonging to the affluent sections. Having earned a formidable reputation for successful implementation of digital literacy programs for the underserved population across India, NIIT Foundation has found willing partners in many corporate houses whose community initiatives are run in partnership with them.

The core agenda to promote digitally enabled sustainable growth in the communities that we operate for a larger good and provide impetus to Prime Minister’s Digital India dream. Enabling e-education for school children, improve sanitation at village schools along with uninterrupted power backup through solar power and skill development for adults, is a humble beginning of  CSR initiatives. 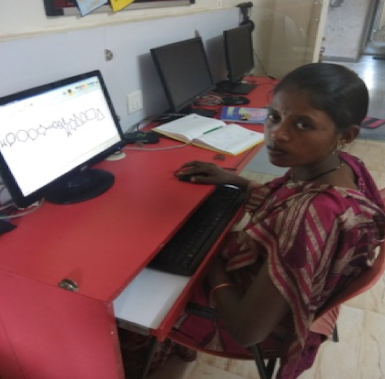 Anusaya belongs to the Katkari Tribal Community in Maharashtra. The social conditions of this community, especially for the women and children are filled with suffering. Women are sexually harassed and children are forced into child labour. Most of the children, especially girls are illiterate because of the non-availability of schools in the nearby migrant areas.

Anusaya too was forced to drop out off school and was married off at a young age. She lived with her husband in Sutarwadi locality in Pune. They had two sons. Recently, Anusaya lost her husband in a work place accident. He was the only earning member in the family. Anusaya was left all alone to fend for herself and her two sons who are now in primary school.

Anusaya was forced to take on the responsibility of providing for her family and found a job as peon in the nearby Balwadi School. Through the principal of the school she learnt about the HCCB Career Development Centre being run by NIIT Foundation in Pirangut district in Pune. Anusaya knew that the job in the Balwadi school was not sustainable. She felt this was her opportunity to harness her skills and knowledge and aspire for something better.

The centre manager at Pirangut could see the determination in Anusaya’s eyes. She decided to sponsor her course at the centre. Anusaya in the midst of her job at the school, taking care of her household and raising her two children, managed to find time and attend the digital literacy classes. Anusaya began to learn how to use audiovisuals, computers, mouse, key pad, paintbrush etc. All this was very new for her. Initially she would hesitate to interact with other students. However as she began to master her skills and the subject matter, a newfound confidence developed in Anusaya. She began helping other students in class. In the group activity sessions, she shares her experience to motivate others.

Post the completion of the course; Anusaya landed a government job in the Gram Panchayat as a Data Entry Operator. This course and job has helped Anusaya in acquiring a regular income and providing her family with security. Anusaya’s story is inspirational as it shows how one can convert a tragedy into an opportunity and fear into hope.